I have no use for RINO’s, that being said we must be careful during the upcoming election to not shoot them all.  The goal is to remove, the progressive/socialists/Marxist who lust to continue to have us be their serfs.

That’s not going to happen!  That’s my story and I’m sticking to it, I’m J.C. and I approve this message.

Throw off the oppressive taxes, regulations, and unelected and unresponsive bureaucracy

Their alarmist hysteria over the imminent demise of the planet – they always call it the planet, not the Earth, Earth being the name derived from Old English and German, and thus Northern European and evil – is always accompanied by demands for draconian measures to save us. Cap-and-Trade, for example, was supposed to put an end to alleged man-made global warming by making the production of carbon dioxide destructively expensive.

Anyone with an IQ over room temperature who has spent even a short time looking into the claims “environmentalists” make to justify sending free, capitalist, Space Age America back to the Stone Age, has discovered that the vast majority of their claims are flat-out lies.

Funny thing, though, few people wanted to see the world’s industrial economies wrecked to lower a substance that, a) all of us exhale when we breathe; b) plants need to absorb to survive; and c) has no scientifically proven causal connection to global warming, or as the greenies are now calling it, “climate change.”

END_OF_DOCUMENT_TOKEN_TO_BE_REPLACED


By: Kenric Ward
Comment by Jim Campbell, Citizen Journalist
Let us not forget the useless RINO Lindsey Graham lost below in the fine print.  He of course was a co-sponsor with two Democrats on climate change legislation. 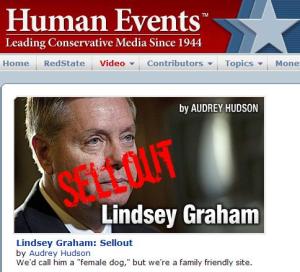 Comparing the four-term Naples congressman’s record with the 16 months that rival Republican George LeMieux served in the Senate, the FreedomWorks analysis argues that Mack is the more reliable conservative.

“Perhaps most significantly, Mack was one of the few members of Congress in 2008 who voted against the TARP/Wall Street bailout — twice.

“This shows he is willing to stand up to Republican leadership to take a position he thinks is right,” states the FreedomWorks document released over the weekend.

The “Florida Senate Race Brief” goes on to laud Mack as a Republican who “has challenged [GOP leadership] to be more conservative” and cites his top 10 percent rating among groups such as Club for Growth, the National Taxpayers Union and the American Conservative Union.

END_OF_DOCUMENT_TOKEN_TO_BE_REPLACED

I’m in agreement with Ms. Evans.  Perhaps she missed Sarah Palin’s strong endorsement for Orrin Hatch.  That was weird, I could not get him involved with his buddy McConnell  to go for a filibuster on Supreme Court Nominee Elena Kagan.  We must that the ultimate RINO ma’am Ms. Lindsey Graham for signaling to all that he would vote with Collins and Snowe to allow the nomination to go through.  This type of dolt like thinking is not needed in the Republican Party.

Republicans in Congress better wake up and start freezing some of their own targets against the left if they hope to see a GOP victory in November. The level of corruption, from murdered federal agents to looting taxpayer monies got green companies like Solyndra to the war on religion should be enough to have our elected representatives up in arms.

Yet, there are still legislators who remain squeamish in the face of our constitutional republic’s impending demise.

Sarah Palin got it right on Monday while on Fox News’ “Hannity.”

END_OF_DOCUMENT_TOKEN_TO_BE_REPLACED

4 RINO’s among Democrats to Fall in North Carolina: Republicans to gain control of the Senate


The days of moderation are over.  Those that call themselves Republicans who have some deep seeded psychological problem requiring congressional love leading them to compromise are as responsible for the economic morass (Bill Clinton’s favorite term), as the liberal democrats that put forth their foolish delusions that tend to become with no thought given to unintended consequences let alone the costs.

Just another way of saying RINO

Some like it hot. Some like it cold. And the Tea Party likes it red-hot, as in, red states. Three energetic Tea Party candidates are heating up to beat RINOs and help return the U.S. Senate to a true conservative majority.  Rhinoceros horn is popular in Asia for its purported healing powers. Asian demand sends poachers to Africa to hunt the endangered animal. Last November, one Hong Kong poacher surrendered $2 million of illegal rhino horn to authorities. In the GOP, however, RINOs (Republicans In Name Only) are losing popularity. The RINO’s “horn” is compromise and Americans are tired of compromises like Obamacare. Americans want politicians who will just say “no” to socialism.

The GOP needs to gain four seats this fall in order to take majority control of the U.S. Senate. To win these seats, I think the GOP must run authentic Tea Party conservatives. Leave the big-spending, EPA-kissing RINOs behind; they are unelectable. Here are three hot Tea Party Senate candidates that I believe can paint the political map red in November:

END_OF_DOCUMENT_TOKEN_TO_BE_REPLACED

Tagged 4 RINO's among Democrats to Fall in North Carolina: Republicans to gain control of the Senate

Generally, I hate the word RINO. In modern political discourse it serves no purpose other than as an insult hurled at someone with whom the speaker disagrees. Accordingly, I try to use it as sparingly as possible and only when it truly applies – when someone really is a Republican in name only.

Let me illustrate. People frequently use the word “RINO” as a pejorative against moderates, but that’s not really accurate. Take a guy like Mark Kirk for instance. Kirk is a squishy guy who can really infuriate you with his votes at times, but Kirk is a loyal guy to the Republican party.

I mean, he needs to get re-elected now and then and so he casts votes with which I strongly disagree, but Kirk is not going to go out and openly endorse a Democrat, hold pressers with Democrats where he bashes Republicans, or bail for the Democratic party if things get too difficult. Kirk is a moderate, but not a RINO.

END_OF_DOCUMENT_TOKEN_TO_BE_REPLACED

This clueless dirt bag was the vote that let Kagan the pro Islam Marxist become a justice on Supreme Court.

He also failed to speak to the mother or get involved with the release of Pfc. Corey Clagett, wrongfully sitting in solitary confinement at Leaven Worth, KS.  He wrote to Corey’s mom, “I chose to not get involved.”

Ms. Lindsey you are going to be on my hit list for removal in 2014. In fact I’ve already got a website up for you and you are on it.


By Dennis Myers
dennism@newsreview.com
Earth to Mayor Bob you call yourself a conservative?  Pull out a dictionary.  RINO’s just like you get a bit long in the tooth.  Living in the shadow of Sr. Harry Greed would be daunting if your weren’t a wimp.  Time to step aside.
That’s my story and I”m sticking to it, I’m J.C. and I approve this message.
Reno Mayor Bob Cashell, a former Republican state chair and Nevada lieutenant governor, said last week that the rightists in the Nevada Senate are not representative of the party. Cashell was reacting to the way far-right senators mustered enough votes in the Senate GOP caucus to force Washoe Sen. William Raggio out as Republican floor leader after Raggio grudgingly supported Democratic U.S. Sen. Harry Reid’s reelection.

“I think it was very petty,” Cashell said. “I think it was very vindictive. These people claim to be Ronald Reagan conservatives, and they’re not. I knew Ronald Reagan. He asked me to join the Republican Party when I was a conservative Democrat, and I’m still a conservative Republican. … Ronald Reagan felt there was room for all of us in the tent to agree to disagree and not say vile things about each other. But when you come out and you’ve got people, they want to get their pound of flesh, I think it’s terrible. I think it’s very, very disturbing to the whole organization. It’s splitting the organization.”