Lindsey Graham is basically John McCain Jr. He’s a warmonger, flaming RINO, believes in CAP and Trade, Amnesty, etc. Now he wants military intervention for Syria to be ‘on the table.’ Forget about it Grahamnesty.  Where were you on Yemen?  We are already in  wars in Muslim countries (Iraq, Afghanistan, Libya and Egypt.)

The gutless Graham who doubtfully knows how to load a weapon and use it has no problems with our warriors being put in prison when he is to gutless to enter the area of operations.  Yea Lindsey let them rot because you are a politically correct wimp and pass judgment upon those willing to lay it on the line while you do so to draw two pension from the United States Taxpayer. 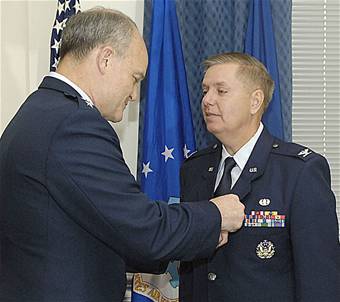 Lindsey Graham is a disgrace to the USAF JAG Corps. He is a disgrace as a United States Senator. He failed to help Pfc. Corey Clagett in is clemency hearing saying in a letter to his mother, ” I choose not to get involved” You sir will be looking for a new job in 2014.

We don’t need another  useless war to help a bunch of radical Muslims would will never appreciate our help anyway. Graham was apparently in Afghanistan for two weeks? Why did he even bother returning? Let the Afghans have him.